Cemetery was indexed in 2009. Scroll down to review the index.

The cemetery in Słucz, with an area of 1.5 hectares, is situated not far from the church. It is surrounded by a brick wall; the front gates are made of metal. The graves are mostly from the Second World War era, yet several crosses found are decidedly older. Unfortunately, most of the graves do not have headstones. We can gather from Adam Kuderkiewicz, from the year 1869, that the oldest marked burial sites with a cross and headstone are most likely from this era. One of the oldest and at the same time most interesting is the headstone and crypt of Kornelia Szczęsnowicz nee Humięcka, who died in 1877. The tombstone is found a distance from the completely buried underground crypt, but according to word of mouth, laid to rest inside is Kornelia and possibly other family members. A beautiful epitaph is written on the headstone: “That was Your Will! And you took her, God. I, as a husband, bleeding with pain, humbly adore you and say be praised! My wife, who was my entire happiness – is there, in ashes and dust.” Adela Glinka nee Ramotowska, was buried most distant in time, in the year 1867. She is buried in a common grave with Marjanna Ramotowska nee Godlewska, who died in 1875, and with Weronika Dabrowska, nee Ramotowska, who died in 1887. Unfortunately, I am unable to state an approximate date of the tombstone placement. The oldest person buried is Jozefa Rydzewska, who was 100 years old when she passed away. 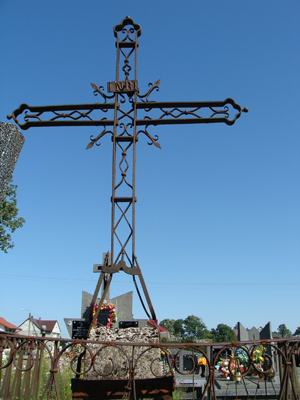 Three priests are laid to rest in this cemetery: Ks. Jozef Nagorka, who died in 1899 at the age of 93, he was the pastor in Slucz for 37 years; Ks. Ignacy Nowakowski, who died in 1909 at the age of 42, and Ks. Roman Krajewski, who died in 1982 at the age of 76. There are also several markers for people either murdered in a concentration camp or fallen in war. For example: Henryk Rogowski, murdered in Glinki in 1944; Leopold Rogowski, died in Buchenwald in 1945; Wladyslaw Jurski, AK soldier, a heroic casualty for the freedom of his fatherland; Aleksander Kadlubowski, died during the occupation in 1944; Franciszek Mscichowski, WP officer, murdered in Katyn in 1940; Antoni Mscichowski, priest, murdered in Dachau in 1940; Bronislaw Legowski, casualty of Monte Casino; Boleslaw Legowski, fought in Monte Casino, died in Canada.

More than 1450 people whose first and last names can be identified are laid to rest in this cemetery. The graves are single, double, and family sites in which several family members are buried. In accordance with reigning customs of this region, the information given on the headstones includes first and last names, the exact date of death, and the age of the deceased. Sometimes the exact date of birth is also indicated. There are also occasions when the information is limited to only first and last names. Quite a few of the graves have photographs of the deceased, oftentimes found on the headstones. Sometimes this is the only preserved ancestral family photograph.

The cemetery is well maintained and it is pleasant to walk the pathways, proudly taking in the fragility of our life and others who have passed away, and thanks to whom, we are who we are. With a feeling of sadness and indecision, I look at the beautiful old crosses, evidence of epochs gone by, which are forgotten and abandoned by the living. Thanks to the efforts of the pastor Rober Zieliński, the donations and physical help from church members, several of the crosses have been restored to their original dignity. 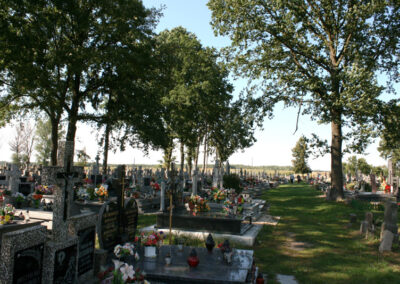 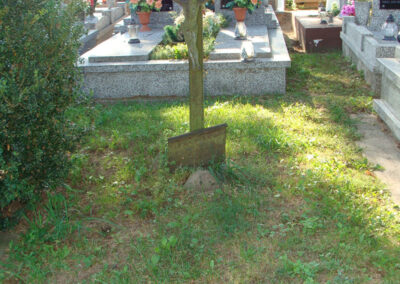 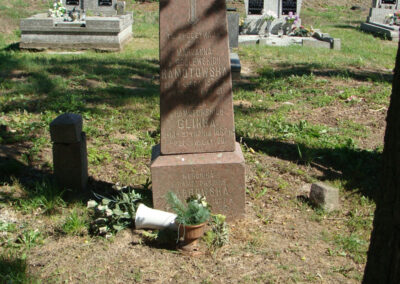 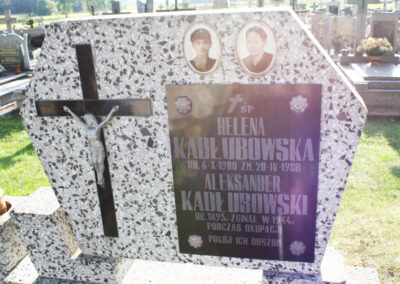 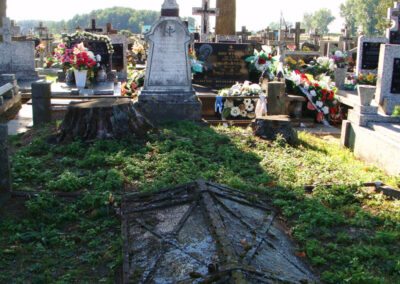 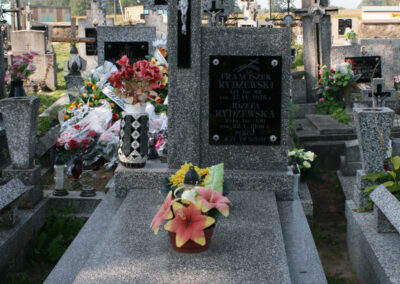 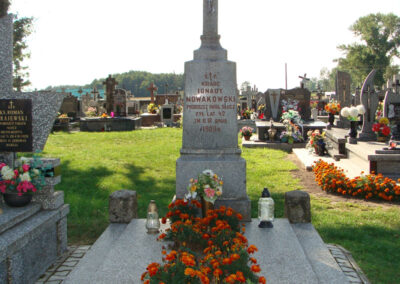 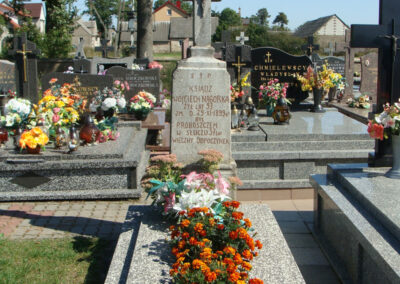 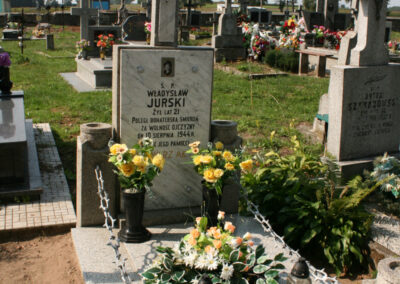 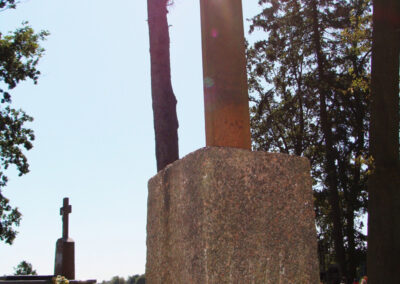 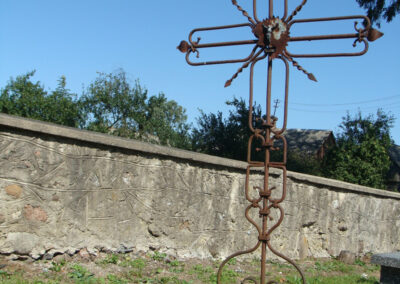 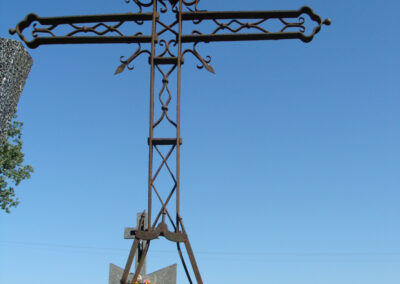 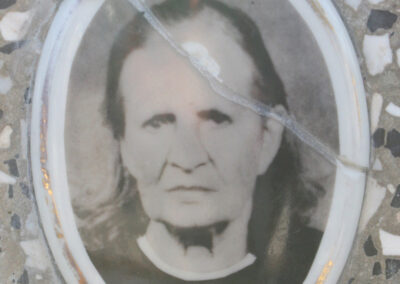 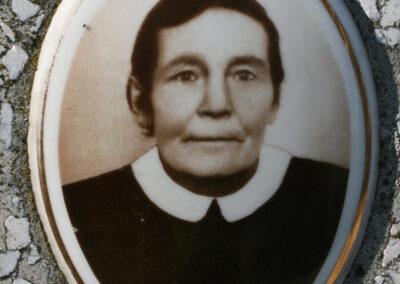 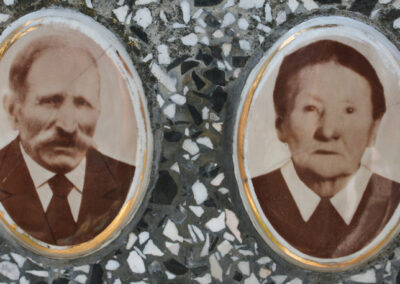 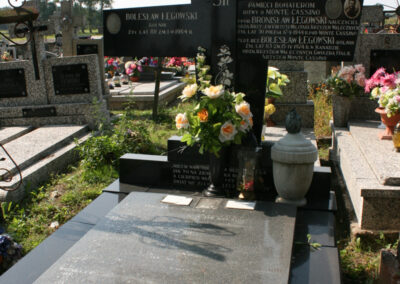